Very rare that I would dedicate a whole essay / posting to one human being. 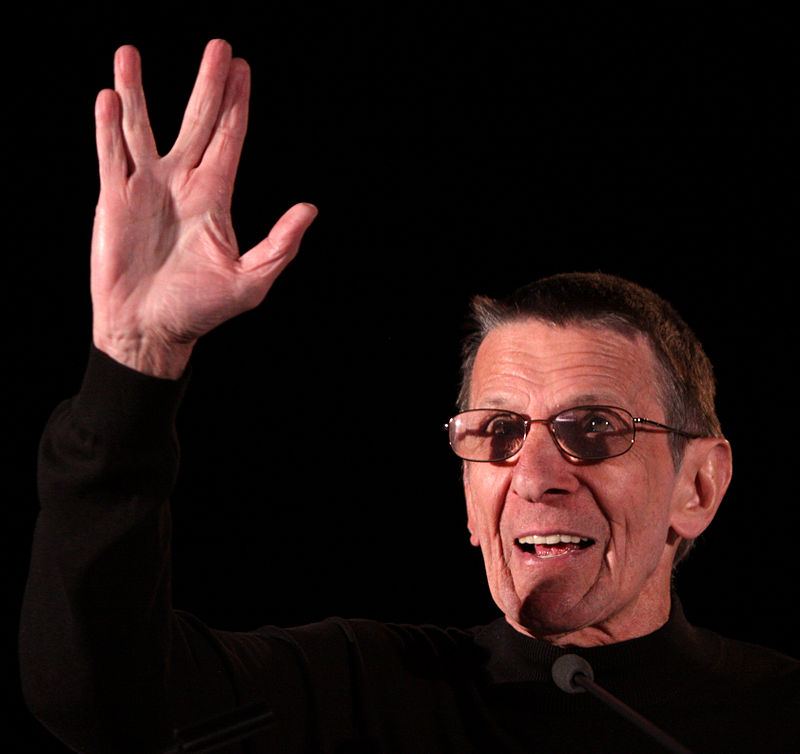 But this is different, this one was a hybrid, half human, and “half past human” (Salute also to Clif High!), really very much advanced benevolent ET like. Not from here, to be sure. But maybe also not from OUT THERE completely either! He had balance.

Leonard Nimoy left planet Earth at the same moment I turned 56, which made me pensive I admit, to say the least, very pensive. Like for you, or for most of you, he was a childhood hero to me, in the sense of inspiration. The things he uttered had left a deep mark on the mind of a toddler boy in the 1960ies.

It still always brings up the question as to why StarTrek was canned? Not going to dwell on that.

Extremely rare that someone can capture the whole planet for ages by his mere presence. “The Presence” as described by Krishnamurti student Zensu in her works, is something we discussed also in my book LIGHT-SEEDS. It has a mix of super natural at best, or paranormal at base level. This stuff scares most folks, so I won’t dwell on it either.

You will often see people who are not at home here, maybe you yourself also do not feel like you really are from here, nor do you think that you fit too well in here. That is maybe why you still read my work? Then again, many billions of folks are really from here, and their issue is that they don’t mind messing up their home base.

So you have different forces here. Those from here who mess up their home, and those of us not from here, who feel trapped here and abandoned by our friends out there. Well, sages say that we signed up for this mission volitionally. Meaning we knew full well what this would entail, when we decided to come and be born here on this planet. Still, at some point there has to be a change. Those who want to stay here can stay here, and those not from here could leave?

As you know from my book, I am in the category of the fewer who are not from here. I am in a minority, to say in in plain English clear text. Totally 110% not from here, maybe also hybrid, but from other races, perhaps Nordic, combined with a bit of Sirian and a few other genes, perhaps from elsewhere. But not from here.

It is so that people “not from here” are valuable “assets” to this planet in some way, and to those who left them here, but lately they have to take a low profile, because they will be probably blamed for things that will happen on this planet, just because they warned about it. And if things go the way Doris Lessing described in her works “Shikasta” and “Sirian Experiments”, then you know what I mean. OK, but we won’t dwell on this point either.

To come back to Mr. Spock, Leonard Nimoy met the young Massachusetts Senator John F. Kennedy (a virtual unknown playboy then) when he Nimoy (completely unknown then also) picked him up at the Bel Air Hotel in LA sometime during the 1950ies. They had a sort of intense little chat in Nimoy’s cab, and the exchange possibly marked both men. Later, in 1962, Nimoy asked President JFK in a telegram to please not allow H bomb tests, which unfortunately went ahead anyway. Maybe JFK still got to see Nimoy transcended into Spock in 1963? This I am not certain about. But more likely JFK saw Spock again anyway later.

Spock / Nimoy was for real, more real than real, and more human than human also, to salute the Blade Runner fans… and in his “spare time” so to speak he would even write profound poetry. Here are two I liked a lot. He wrote:

I have walked alone seeking answers
I have lived alone chasing dreams
I have tried to prove my worth to worthless judges
I have cried my pain in silent screams
I have been sometimes served a touch of kindness
I have wandered in golden fields of Grace
I have been released by honest laughter
I have touched the Western Wall of the Holy place.
I have soared alone above the cloud heads
I have walked the deep dark tunnels of earth
I have dines with mystics and with prophets
I have heard the pain of woman giving birth
I have been sought after as a teacher
I have been refused the laurel wreath
I have heard the thunder blast of sunrise
I have watched the final touch of death
I have played the rules set by the master
Though often I didn’t understand the game
I have worn more masks than I can remember
I have been a face without a name
And when like you I ask the final question
Who on earth am I supposed to be
I always come full circle to the answer, me, only me…always me.

Pictures of You
– Leonard Nimoy

Like his buddy William Shatner / Capt Kirk, Leonard Nimoy Spock is Aries born. On March 26, 2015, Spock would have turned 84. Goat year Aries, like Shatner. No wonder the two are who they are together on screen forever.

We have many great birthdays up next in Aries, and William Shatner opens it up on 22 March after the eclipse equinox. Greek mystic game theory expert (temporarily now functioning as finance minister) Yanis Varoufakis, like Spock, on 26 March, or gold guru Jim Sinclair & seer Zensu on 27 March, etc. Salute also to colleague Chris Flisher, Aries astrologer. Now with Mars, Venus and Uranus in Aries, this is their time. To all my Aries friends, without whom I could not have done what I did, I say:

(It is important we hang around, no leaving allowed until we are done here, ok, deal.)

This is a very bizarre, trick, volatile, time ahead, utterly edgy, uncertain, and really anything unexpected could happen to either derail the best laid plans, or to create a miracle, and I have seen both scenario cases manifest before. I thought Spock would stay here for the next 800 years, after all, we are designed to last that long. but then, the unplanned happens.